A Family Portrait in Black and White

The minister and his family lounged by the hotel pool during the day and ate in the fine dining restaurant in the evening.  Later that night the hotel called four police officers to demand entrance into the family’s room to investigate the report of child molestation suspected by another guest.  The questions were forceful, unapologetic, and revealed no more information than was already on file on the room registration card.

The oldest son was concerned by a teacher and another student at his public school in liberal San Francisco.  They told him that his family was going to hell because of what the Bible said about their lifestyle.

“After a year of dwelling in the liberal Mecca San Francisco,” says the minister, “the messages have been mixed when raw feelings break though the veneer of political correctness.” “Through the snapshots of everyday life from one family evolve religious principles with universal application,” he wrote about his stories. 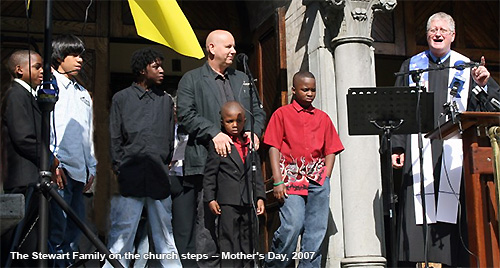 I left the church thinking about issues and life and San Francisco slightly differently than when I walked in.  Interesting. Heart-string-tugging.  Anger-inducing. Revelatory. Hopeful.

The chance that I will hear a sermon like last week’s A Family Portrait in Black and White is a big reason I come to church on Sunday.

The audio of Rev. Gregory Stewart’s story of A Family Portrait in Black and White.