Posted on August 23, 2015 by Galen
Ashland, Oregon
at the Oregon Shakespeare Festival

Anthony and Cleopatra
by William Shakespeare 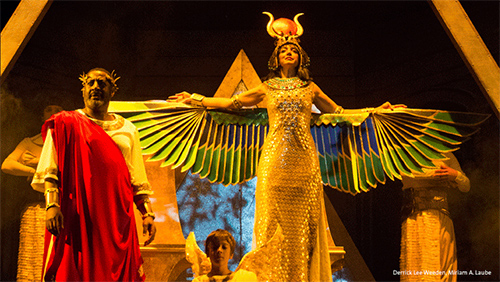 By far the best aspect of Oregon Shakespeare Festival’s 2015 production of Anthony and Cleopatra is the set. Scenic designer Richard Hay creates a clean, beautiful, symbol-filled space for the Shakespeare tragedy.  The golden-royal triangles reprised in various forms work as ships, pyramids, and boundaries.  The triangles are bold and colorful, and vivid Egyptian-themed props enhance the feel of empire and luxury. Hay does a great job.

He skillfully keeps the physical on-stage material to a minimum.  He needed to because any actual scenery would be chewed to saw-dust by the manically overheated actors.

Good Lord!  What a complete lack of restraint, scene editing, and scene selection.  What a void of storytelling. What an uncomfortable mess.

Director Bill Rauch serves up an unfocused Anthony and Cleopatra.  There is no evidence of artistic decision making that could guide the audience through Shakespeare’s admittedly overfull story.

But, it isn’t just the failure to define a reason for this production that makes the evening tiring.  Rauch interjects truly wrong, slapstick overacting at dramatic moments. Important scenes are littered with Marx Brothers low-brow comedy. I kept thinking, “Are we supposed to laugh at that? Now?”

When poor Brent Hinckley (Clown) walks into Cleopatra’s chamber to deliver the poisonous asp that will kill her, he’s made to hum, “The worm goes in, the worm goes out.” Shakespeare may have written the scene with humor, but a director with a concept would have either cut the jokiness or made the character serve as a telling counterpoint to the tragedies befalling the main characters.  In this production the effect is simply jarring.

As in most truly bad theater experiences, it is unfair to fault particular actors for the director’s sins, but prospective audiences need to be cautioned! Normally excellent performers Miriam Laube (Cleopatra) and Derrick Lee Weeden (Anthony) rule their empire with the subtlety and regalness of Charo and Donald Trump. I suspect they were cast for their volcanic emotive ability and ordered to pour it on. Unfortunately, there is no payoff for the audience for the lead characters’ histrionics.

Raffi Barsoumian (Caesar) is allowed to be a cool, dignified contrast to the hot blooded lovers.  He is a welcome presence on stage, but still cannot drain the swamp of emotion and confusion of too many small scenes, too many stories, and too many characters that Rauch sprays from the Shakespeare reservoir.

On the other hand, Costume Designer David C. Woolard only adds to the visual confusion. His clothes are mostly ugly and inappropriate.  Cleopatra too often wears lounge singer dresses.  Sometimes they’re plastic looking, sometimes they’re just trying to reveal too much.  She’s made up slutty, not sexy. A notably bad choice of a round cap for an Asian actor makes him look right out of China when something more careful would have kept him in Egypt.  And, then toward the end of the play soldiers in Alexander’s army start tying Good-Will-purchased, ratty red scarves tied around their necks or arms.  They haven’t fought yet, so the red is not blood. Is it? What is it supposed to signify and why are they wearing it?

There is also an annoying electronic sign that displays inconsistently at the start of a scene. The sign gives the location of the action such as “Alexandria” or “Rome”.  The information is unnecessary, especially the third or fourth time we return to the same set.  Instead of helping me, I got distracted with its unpredictable wording.  Sometime we were told that we were in “Athens, Greece” and another time we were merely in “Athens”. I spaced out wondering if this Athens was in Georgia or exactly where were we?

And, the hair styling!  The Caesar loyalists with their Caesar cuts are a bit obvious but inoffensive.  It’s the Egyptian pageboy dos that cry out for mercy.  I already used “ratty” to describe costume parts, so how about “rats-nest-like” hair? Uneven, fly-away, and badly done.

Occasionally the stage is gorgeous.  The set is lit richly and peopled with actors in full, colorful robes.  Even if the robes don’t make sense and look oddly proportioned, the moment is beautiful.  Those seconds are the highlights of this turn-back-your-ticket bad Anthony and Cleopatra.

This entry was posted in osf, plays and tagged 2 stars, Anthony and Cleopatra, Richard Hay. Bookmark the permalink.