Posted on October 29, 2017 by Galen
Berkeley, CA
at the Berkeley Repertory Theatre 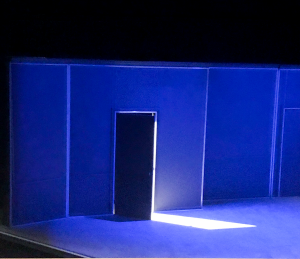 Opening Scene of IMAGINARY COMFORTS,
OR THE STORY OF THE GHOST OF THE DEAD RABBIT

I am unreasonably pleased at not knowing how to start a discussion of Imaginary Comforts.

The locally-produced theater I’ve seen in the Bay Area in the past decade has been linear, easily described, one-dimensional. Some productions, especially recent Theatre Rhinoceros shows, have been quality, great fun events. But, none has risen to the gob-smacking, “I got to think about this” level that the productions at the Oregon Shakespeare Festival frequently obtain. In fact, the only mind-twisting disrupted narrative I’ve seen on stage in San Francisco has been the packaged OSF production of The Unfortunates. Until today.

Imaginary Comforts is not a straight-forward, easily tracked narration. It is simultaneously clear and chaotic. The purpose of each scene is obvious, but only when it is.

So, how to tell you why it’s amazing art you want to see?

It’s a play about storytelling, and the power of the stories told. The main character is really The Story of the Ghost of the Dead Rabbit. Most people will think the story is horrible. We don’t ever hear the full story. It’s in virtually every scene.

The play opens with Clovis (Michael Goorjian) and his friend who is playing the ghost of the dead rabbit (Danny Scheie) practicing a dramatization of the rabbit’s story. The main character is on stage from the start!

Rabbi Naomi Middleton (? on the last name — it’s mentioned in dialogue but not in the playbill, played by Marilee Talkinton) is consumed with the need to find stories for the funeral of Dr. Gold (Julian Lopez-Morillas). Naomi is all about stories, they’re central to her identity as a Jew and her calling to be a rabbi. She hears the story of the Ghost early on. She initially is repulsed by the story; ultimately she is strengthened by it. The story doesn’t change.

Rabbi Naomi’s insistence on coming back to the central importance of storytelling to Judaism made me consider the style of my own church’s new Senior Minister. Even if they both weren’t redheaded religious leaders, their similar dedication to the power of stories would be striking. It’s not just the Jewish religion that finds power in a good story. All religions and cultures use stories. And, it is not just rabbis or ministers or priests who are consumed with finding the right story for the moment. The rabbit gets to everyone.

But, this isn’t a “good-for-you” intellectual thought piece. Throughout the play the dialogue is God-awfully fun. Witty, meaningful, and wickedly well written. Lots of funny moments. Sophisticated language is interspersed with low-brow physical humor. It works wonderfully.

Moreover, Imaginary Comforts passes my continuity test. There are no orphaned illusions or actions. If we see a gun in Scene 1, it’s used before the curtain comes down. In a play that seems scattered at first, having every bit of dramatic fabric woven into the complete production is a satisfying accomplishment.

I have only mentioned a few of the characters because I think it really needs the 90 minutes to property describe how the people on stage fit together. I don’t mean to short the actors, though. The entire cast rings true.

The set needs a special shout out, though. Applause to designer Todd Rosenthal. The scenes are rotated into place on two turntables, and the interaction between the components mirrors the complex integration of the characters’ stories. The design and movement are strong, simple, and also intricate. The physical stage helps thrust the characters, including the Story of the Ghost of the Dead Rabbit, into the lap of the audience. It’s an excellent design.

This world premiere is fun and meaningful and well acted and well produced. There are a few moments when the language seems a bit stilted, so I wouldn’t discourage an editorial review. And, there were some minor flubbed lines in the matinee we saw.

But, wow! Thank you Berkeley Rep for offering the Bay Area a very enjoyable play that demands attention, analysis, and discussion.