Posted on March 3, 2018 by Galen
Ashland, Oregon
at the Oregon Shakespeare Festival

The photo is truly worth more than 1000 words of descriptive praise. (Click on it to see it full size.) But, here goes…

Director José Luis Valenzuela has directed Destiny at four theaters — everywhere it’s been produced (or at least everywhere I could find on the Internet). He and the author have created a soap opera/comedy of manners/musical that is witty, stupidly low-brow funny, predictable, surprising, and sometimes meaningful.

Go into Destiny expecting a fun romp watching a bad Days of Our Lives.  The play at heart is a telenovela, so it’d be wrong to suggest that the audience is going to learn the secret of world peace by watching the performance.

But, Valenzuela talks a lot about how 1/3 of the world’s population — 2 billion people — is hooked on telenovelas. There is a reason for that nonsensical fan devotion, and Destiny taps into the essence of the genre that makes it addicting. One scene after another delves deeper into relationships, class, and morality. Watching you know that in the end Good will triumph and happiness prevail. Spoiler alert: it does! 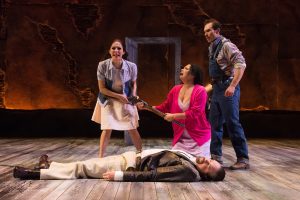 The cast is beyond flawless. They are energetically perfect. They immerse themselves in their characters, crying sincerely over a lost child one moment and then credulously happy the next when yet another plot point releases them from anguish. Then they break into ballads (in both Spanish and English) and dance dramatically. And, they take their turns breaking the fourth wall by delivering comments directly to the audience, and these comments increasingly (and satisfyingly) target social issues as the play moves on.

The playbill and other OSF materials I read later made much of how Brechtian Destiny is. Having actors make sure the audience is reminded that they are watching a play is not a telenovela technique, apparently. Well, sure. I guess. However, I think the improbability of telenovela storylines and the reputed uneven use of technology provides a distance that the ad hoc comments to the audience mimics on the stage. It works well.

It’s not just the script, directing, and acting. All of the crafts had a hand in this creative collage.

The costumes… well, look at a picture again. Click on it to blow it up! Costume Designer Julie Weiss did a masterful job creating elegant, appropriately over-the-top wardrobes for each character. Very, very fun to see.

Francois Pierre Couture, the scenic designer, was no slouch, either. The sets felt like thrown together richness with just the right amount of obvious misses. They came directly from the back lot of the telenovela production company.

I hugely appreciate plays, movies, performances that do a great job at what they are trying to do. I hold Schindler’s List  to a different standard than Star Wars. I rate them both highly because they deliver the best of their genre.

So, I may expect more meaning from Othello than I do a soap opera on stage. But, damn, I appreciate this soap opera!

Moreover, Destiny truly is the modern adaptation of Sense and Sensibility that OSF doesn’t deliver in the S&S production. Destiny deals with class, income inequality, manners and mores. It exposes the 2018 world’s roughness, tenderness, and delivers on the hopes for a happy ending.

Destiny of Desire runs only through July 12th. Buy your tickets now! The morning after the opening production I went online to buy a single ticket for a Saturday matinee in mid-April, and the performance was sold out!

2 Responses to Destiny of Desire