Posted on August 25, 2015 by Galen
Ashland, Oregon
at the Oregon Shakespeare Festival 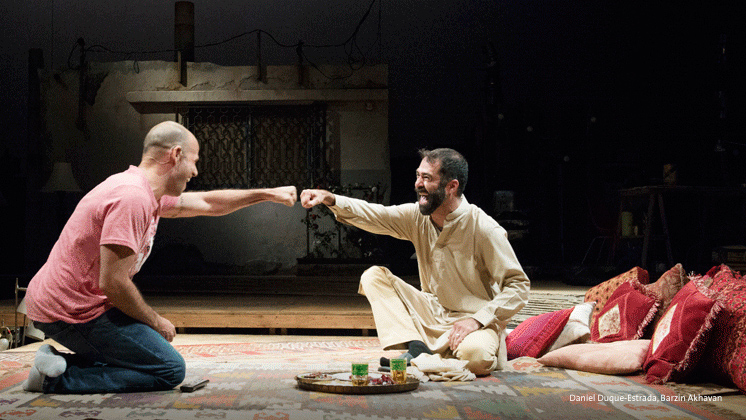 The Happiest Song Plays Last, the third installment of Iraq war veteran Elliot Ortiz’s struggle with his combat experience and aftermath, fulfills the promise of the complex emotional saga. While nominally about Elliot,  three characters have legitimate claim to be considered the lead: Elliot (Daniel Duque-Estrada), his cousin Yaz (Nancy Rodriguez), and Yaz’s neighbor Agustin (Armando Duran). Even then, some of the deepest scenes center on other characters, Ali (Barzin Akhavan) and Lefty (Bruce Young).

This play is a gripping, draining, intense, tender, and difficult. Like the two earlier chapters in Elliot saga (Elliot: A Soldier’s Fugue and Water by the Spoonful), The Happiest Song Plays Last lingers on psychological damage and the details of personal terror.

The play exists to discover the relationships between the characters and the characters’ growth. The Ashland production succeeds magnificently because of the vision of the director, Shishir Kurup, and the cast.  I have read views of other productions from around the country, and they and the awards panels have favored Water by the Spoonful to the The Happiest Song Plays Last based on what they perceive as the strength of the core stories.  All I can say is that they just didn’t see The Happiest Song Plays Last at OSF.

Because I have friends who are refugees from the Middle East and Northern Africa, I was smacked particularly hard by the scenes in Jordan and Egypt.  The vignettes between Elliot and Ali, an Iraqi army veteran now working on the same war movie that Elliot is starring in, were so simple and so wrenching.  Truly brilliantly underacted by both men, the exchange of soldier understanding between people who fought on different sides was powerful beyond words.  The look in Ali’s eyes, the pauses, and the awkward recoveries of both soldiers back to the manly present were brilliantly written and executed.

Those moments were key to the Elliot’s eventual integration of his soldier past into the present with a new generation of Americans and Iraqis.  They were beautiful, tear-inspiring moments.

Duque-Estrada’s Elliot also is an order of magnitude more impressive than the one we saw on stage last year.  In Water by the Spoonful Elliot was played by a young, less mature, physically-never-a-Marine actor. This Elliot looks the part both in size and in world-experience expression.

Elliot’s sojourn through the war didn’t just affect him.  Throughout the play series, his family and neighborhood in Puerto Rican Philadelphia struggled with his soldiering and trauma. In this concluding part of his story, his cousin and her neighbor further the family and community’s distance from Elliot’s initial service. 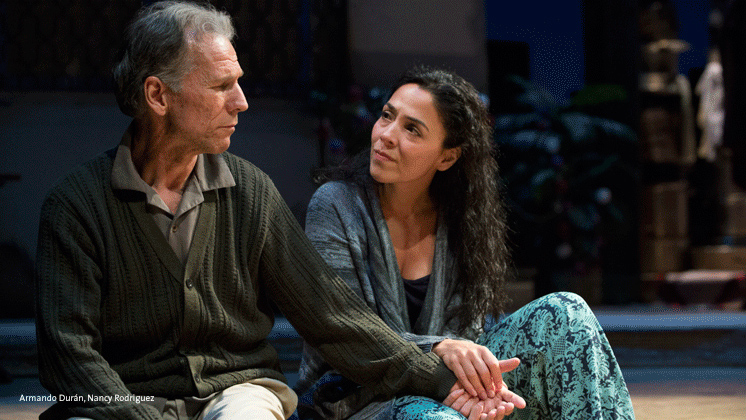 Agustin, the neighbor, is given the spotlight as his personal journey and musical compulsion well represent his age and its more ethnically centered worldview.  Agustin’s scenes are simultaneously lyrical and realistic. His chemistry with Yaz spans the generations, and the shared neighborhood exposure glues their relationship.

Elliot, Agustin, and Yaz are all major roles.  Ali, Shar, and Lefty are given less stage time, but have real, significant impact on the story. Ali in particular is irresistibly compelling.  I found myself bidding on a dinner hosted by the actor at a charity auction, and I think it was because I wanted to know more about Ali and his life.

The crafts were faultless.  Set, clothing, lighting, sound all were top-notch professional. But, to be honest, The Happiest Song Plays Last is completely dependent on the acting. And, each actor on stage deserved the standing ovation.

The production also has the best cell phone announcement ever.  Before the play starts, street-person Lefty is on stage arranging flowers, blankets,… whatever.  He then stops and chats with the audience about cell phones and cough drops.  His brief banter deserves some iPhone or Android award.

I did feel that the ending of the trilogy left some questions unresolved.  Elliot buries the past in the final scene. Does it stay buried? Does his cousin simultaneously recover from her emotional funk? And, how about the 3-year-old Iraqi described very late in the play?

I guess we are never assured that the happy ending sticks.  But, without wanting to risk the unraveling shown Into the Woods, I would have liked the story to seem more final and less wrapped up in 5 minutes.  Still, it’s an excellent experience.