Director Christopher Liam Moore invented a brilliant, fun concept for this workhorse comedy: set it on a 1930’s movie musical set.  Emphasize the scripted music and add more song and dance!  Unleash the voices and tapping toes!  Keep the Shakespeare give it 20th Century Foxiness!

Scenes are sharp, funny homages to classic the musical films of the day.  Susan Tsu’s costumes are elegant and completely right.  You get your ticket’s worth from the fashion show alone. 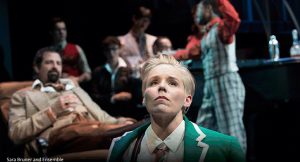 You will be talking for years about Moore’s use of technology to create an old-time video to let Sara Bruner appear together in a climatic scene as both shipwrecked twins, Viola and Sebastian.  The bed and breakfast crowd oohed and ah’ed over the tap dancing scene.  So much fun!

Except, for me, it wasn’t much fun.  The acting was manic not measured.  Lines were screamed constantly, and I found it impossible to get drawn in or care.

“A spectacularly funny romp,” is the Eugene Art Talk review snippet OSF highlights on one of its website slides.  Unfortunately I think it was more a disorganized, noisy riot than artistic romp.

I saw the play on opening night in February.  Ashlanders say that the frenzy has been tamed somewhat as the run progresses.  I hope so because there was innovation in the approach and plenty of talent on stage.  Yet, for me, it was not a very pleasant evening.