“Manahatta” at the Oregon Shakespeare Festival

Posted on September 29, 2018 by Galen
Ashland, Oregon
at the Oregon Shakespeare Festival 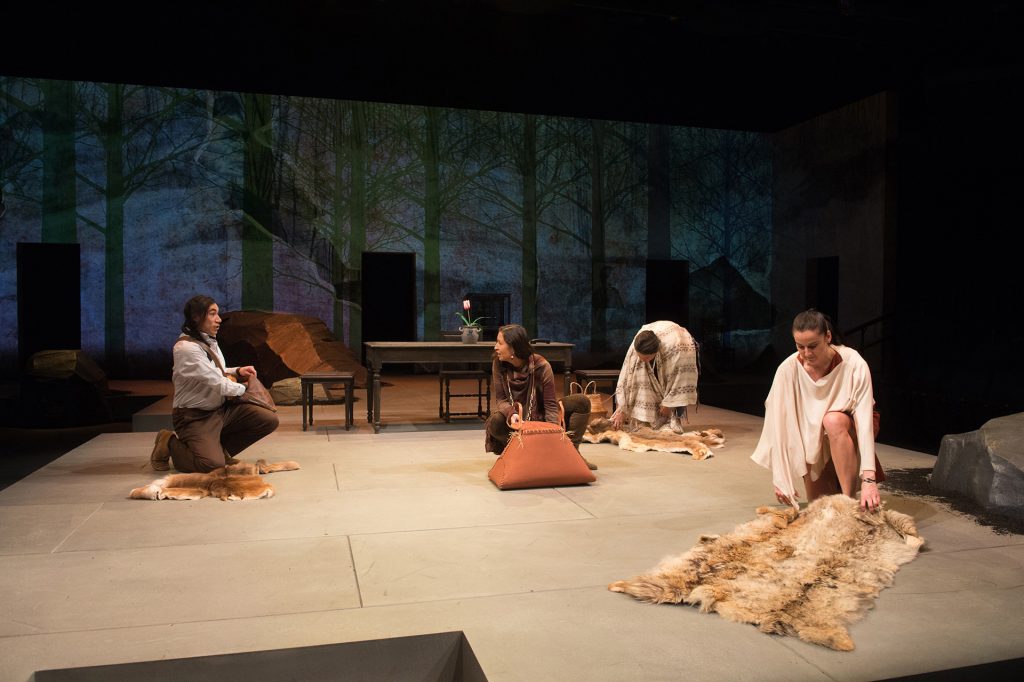 This world-premiere production tells the story of the poor treatment of  Native American people by Imperialistic white “settlers”, brillianty weaves together narratives four centuries apart, and gives us a satisfying understanding of how the actions taken in 1626 reverberate in today’s America.  Manahatta deals with themes similar to the also-world-premiere The Way the Mountain Moved , but Manahatta did it right, engaging the audience instead of giving a sermon to it.

Manahatta is about people who, of course, are informed by the world events they’re experiencing. The actors play two roles, one from the 17th Century and in from the 21st Century. The roles are somewhat reflective each other: Jeffrey King’s powerful white guy (Peter Minuit) from 1626 is contrasted to his powerfalling white guy (Dick Fuld) in 2008 while Tanis Parenteau’s Native American maid (Le-le-wa’-you) is paired with the 2008 savvy Jane Snake. And, other cast members have similar double roles.

The play exploits the different types of interaction between the sets of characters. The more innocent and mostly more moral American folk both keep/rediscover their traditions and also partly incorporate the European aggressive immorality into their souls.

Or, something like that. Trying to describe why Manahatta works so well kills the reason it’s special.

Manahatta delivers stories through people. The stories mesh, play off each other, and let the audience go “Aha!” They illustrate sides of our country which are not so wonderful, but which are integral to who/what we are.

You’re drawn into thinking about the nation’s history because of the interesting characters you’re following on stage instead of being beaten over the head by pointed convoluted plotlines or didactic dialogue (a la The Way the Mountain Moved).

Jeff King plays two historical characters. Peter Minuit is a businessman/colonial governor who buys Manhattan from the indigenous people for trinkets. King’s second role is Dick Fauld, the Chairman and CEO of Lehman Brothers when it went bankrupt in 2008. He interacts with Parenteua’s characters in both centuries. In the 1600’s he is the conquering/demanding White Man dominating Le-le-wa’-you and Native Americans. In 2008, King’s character’s downfall and exit is assisted by his savvy Native American protege, Jane Snake.

There’s no “Got you, you son of a bitch” feel to the switch in fortunes. Rather, there is a feeling of maturity and coming to rightful power in Snake’s actions. The relationship between the pairs of characters matures and evens, but the raw nastiness of the initial imbalance lingers in your mind.

The cast is perfect. King and Parenteua set the standard for clear, natural time shifting. With the leads — and all of the players — you quickly realize which time period the character is in, and how their lines blend/contrast/complement the words last spoken by their doppleganger. While there are significant costume differences between the periods, I don’t remember looking at them as clues for which role the actor was in. I always knew which person I was seeing on stage.

Another factor that makes the play so powerful is that the actors know that their roles are connected in some way, but they are different people. It’s not just the 400 years between the parts. Each character had a different background, different culture to react to, different motivation. They don’t think or act alike. But, still, you’re seeing a dominant European man deal with a younger Native American woman in moments separated by 400 years.

The set by scenic designer Mariana Sanchez completes the magic to let the play work. Relative sparse stage, background images that can change, and absurdly subtle props (like a single potted tulip) lets the time slip back and forth without stumbling over heavy scene changes or delays. Her work is a great fit.

Ultimately what makes the dual-role acting so strong, makes time travel both understandable and correct, and makes the little things like the potted tulips possible is the script by Mary Kathryn Nagle and the direction by Laurie Woolery.

Manahatta tells the stories of 400 years of interactions between peoples of different powers and cultures. The play doesn’t blink, but it also doesn’t preach. Instead, through storytelling Manahatta helps you see the America and part of its history differently. You leave talking about the perspectives to your seatmates, people at the bar, and to your friends at the B&B next morning.

The writer and director deserve their own standing ovation.

2 Responses to “Manahatta” at the Oregon Shakespeare Festival