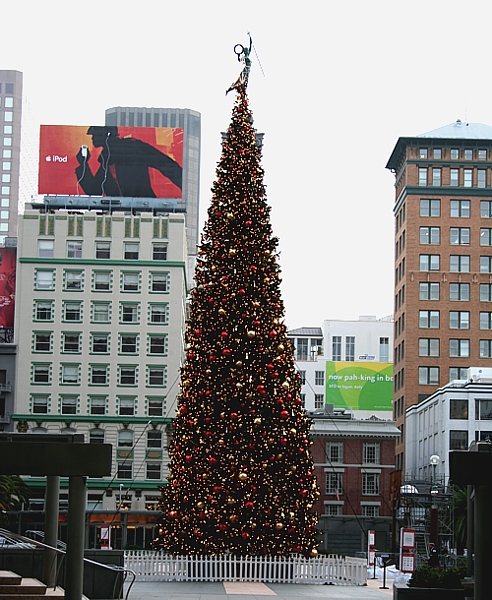 Christmas is hitting me later and later each year, an inverse movement to the increasing early start of the commercial festivities which now begin their breathless “Buy!” message somewhere around Halloween.

This year the holiday came about 7:30 Christmas Eve morning.  redozdachs, his brother Ric (sic ) from Reno, and I walked into Sear’s, the traditional downtown greasy spoon, for breakfast. It was finally holiday time. I let go of the real world during our eggs and hashbrowns fare. Afterwords, we strolled like tourists around Union Square. We gawked at the trees, lights, and early-opening stores offering one final chance to buy the perfect gift.

But, Christmastime had arrived. The rest of the day I used the computer only to play,  I ignored email, and let the voicemail message counter auto-increment on my cell phone. I was in holiday mode.

At the candlelight service at church I delighted in the squalling, squirming children. It is largely their holiday, after all. The slow lighting of the candles that leads to the Congregational procession out of the Sanctuary was an affirmation of my personal transformation into a holiday person. I enjoyed the fumbling passing of the candle flame through the pews. While I watched the room glow brighter from the growing number of candles, I noticed that there were still several adults who had not yet surrendered to the holiday. A man a few rows ahead of me twisted around every 20 seconds or so to chart the progress of the flame into the back of the sanctuary. He was anxious at the inefficiency. He had his candle and was ready to march out singing Silent Night. That was the plan and he was ready to execute it. Now.

I don’t know if Christmas ever arrived for him or for the others who were still swirling and speeding after sunset on December 24th.  I hope so.

Earlier years I remember reaching holiday nirvana as much as week and a half before The Day. One year mailing the final chunk of Christmas cards triggered the endorphins. Another season it was blissing out at Under One Roof as I realized I was shopping for an extra trinket or two that might amuse a friend… and not rushing to buy something that would let me cross off an item or a person on a holiday gift list.

Yesterday was lovely.  It was a family and friends day.  We had our traditional foods and our traditional fights (“Are you going to sit down now so we can open presents??”)  We talked, gave, eat, and received.

I’m still savoring the holiday and its focusing speed.  No sales, no movies and the mall, and nothing too productive for me today, please.  I’m still living the rebirth of the year.