Friday’s protest against Governor  Schwarzenegger’s veto of the marriage equality bill turned out to be another excuse for the Laundry-List activists to get together and chant the same slogans they chant at every other venue with a public address system.  The order of the slogans may have been changed to honor the supposed purpose of the rally, but even in the short time they had my attention, the speakers ventured far from why I had showed up. 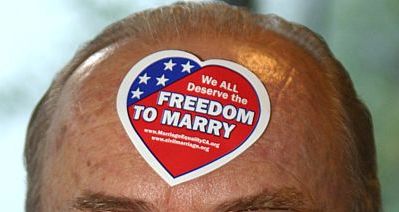 The rally’s organization tactics were good.  The event’s start at the Castro MUNI Metro subway exit at the height of rush hour made attending easy, and even the normal flow of going-home commuters guaranteed a crowd scene for the waiting television cameras.

But, oh damn!  The protest lost the attention and attendance of the commuters as soon as they heard the harangues from the podium.  Many slapped on Marriage Equality stickers to show their support for that cause as they ran down the streets to their homes and friends and away from being used by the perennially committed politicos running the rally.

The righteous civil rights cause that was supposedly the reason for us to gather was just one of many issues on the minds of the people with the sound system.  Instead of hearing focused, ringing calls for action to allow all loving couples to marry, we were diverted into considering the grand left-wing coalition of conspiracy issues.  From my spot on the sidewalk, there were more Service Employee International Union signs calling for “No” votes in the November election than there were placards demanding that couples be treated the same by the civil laws of the state.  Ad hominem attacks against the Republican governor were shotgunned to the crowd without regard for their accuracy, relation to equality, or ultimate effectiveness in winning the hearts and minds of our fellow citizens. When the speaker demanded an end to racism against Caribbean people, I couldn’t take it any more myself. 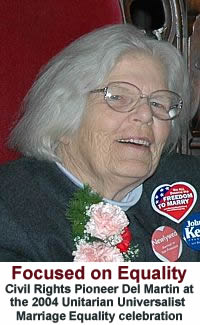 The Governor of California had just vetoed the first marriage equality bill passed by a legislature in the United States.  That makes me disappointed and angry.  While I am not in favor of racism of any kind, Caribbean racism was not the focus of my emotions just then.

Others are so much better than I am at seeing the grand connections between my cause and 47 other vital interests of international justice.  They know that marriage equality is opposed by the same forces that make the oil companies rich, keep Israel the ruling tyrant in occupied Palestine [how and when Israel became the enemy of the purists, I don’t understand or know… but that’s for another essay], help landlords evict poor widows, force children in China to labor, and generally bring misery to the working people of the world.

I, in my ignorance, find the linking of disparate agendas disempowering, inaccurate, and ineffective.  I don’t want to be marching next to someone yelling that Israel kills babies.  I don’t want to stand beneath a sign urging a “No” vote on a ballot proposition I have not yet read.  I don’t want my anger and feelings used for others’ agendas.

If the SEIU thinks that their political action campaign money matters as much to me as the right to marry whom I love, they are arrogantly wrong.  They are misguided and insensitive, too.

Networking and cooperation among causes who are allies on a number of issues is a fine thing.  If I am for equal marriage laws, perhaps I am also likely to want to work against the Governor’s attempt to make it more difficult for unions to use their member’s money for political purposes. Perhaps. So, sharing of mailing lists and a brief mention of honored fellow-travelers would be smart and mutually supportive. But, enough!

It’s time that rally organizers for left-wing causes to do a reality check.  Friday’s equality rally drew only 200 people, according to the San Francisco Chronicle story.  There were more than 200 angry gay men and lesbians in this city on Friday.  But, we will not stand under banners that belong to other people and listen to causes that are not ours. We will not let anyone use us, or “educate” us for their purpose. We know what we want, and we won’t be co-opted.

Here’s hoping that the next rally treats its constituents like intelligent adults.  Let us hear on-topic speeches and march for the cause that gathered us together in the first place.